An explanation of the PICC line

And so begins two long weeks of IV antibiotics. I just keep telling myself that at least we're doing it from home. This morning was particularly tough, given that we don't usually roll out of bed until about 8, but this morning had to get up at 6 to get Drew started on his antibiotics. We also had to do his breathing treatments and airway clearance done at the same time because we had to leave the house by 8:30 with everyone dressed and fed to get Ella to school on time. We had it all together, or so I thought. Everyone was cranky from being woken up and no one wanted to cooperate. Regardless, we made it out the door at 8:30 on the nose and had Ella to school at 8:45, the same time when Drew lost his breakfast. I don't know if it was an upset stomach because of the antibiotics, or to much to eat this morning, or car sickness, or a combination of all of the above, but it wasn't pretty. Ella was crying that she didn't want to go into school and the teacher basically grabbed her and rushed her in the door so I could take care of Drew. I had nothing in the car to clean him up with but some wipes, and prego mama can't handle the smell of puke (non-prego mama doesn't do so well with it either). So poor puke covered Drew, Lily and I headed home for some marathon carseat cleaning. Cleaning puke out of a carseat is high on my list of the worst things in the world to have to do. And when it has to happen quickly so its all washed and dried and put back together in time to go pick Ella up, it just adds to the fun. And the poor thing can't go in the bathtub with the PICC line in, so I just had to do a wipe down as best I could. I was able to put the twins down for a little nap (which they don't usually take in the morning anymore, but given they got up so early, they were beat) and get the car all cleaned up too. Then I had a popsicle and felt bad for myself for 5 minutes. That's how my morning has been so far.
I wanted to post some information on PICCs because I don't think a lot of people understand what they are. PICC stands for Peripherally Inserted Central Catheter. Here's what I found online about them:

A PICC is a long, slender, small, flexible tube that is inserted into a peripheral vein, typically in the upper arm, and advanced until the catheter tip terminates in a large vein in the chest near the heart to obtain intravenous access. It is similar to other central lines as it terminates into a large vessel near the heart. However, unlike other central lines, its point of entry is from the periphery of the body the extremities. And typically the upper arm is the area of choice.

A PICC line provides the best of both worlds concerning venous access. Similar to a standard IV, it is inserted in the arm, and usually in the upper arm under the benefits of ultrasound visualization. Also, PICCs differ from peripheral IV access but similar to central lines in that a PICCs termination point is centrally located in the body allowing for treatment that could not be obtained from standard periphery IV access. In addition, PICC insertions are less invasive, have decreased complication risk associated with them, and remain for a much longer duration than other central or periphery access devices.

Using ultrasound technology to visualize a deep, large vessel in the upper arm, the PICC catheter is inserted by a specially trained and certified PICC nurse specialist. Post insertion at the bedside, a chest x-ray is obtained to confirm ideal placement.

And here's a picture of where the PICC goes

And this is what it looks like on Drew's arm (this isn't his arm, but he has the same set up). When we administer the antibiotics, we just hook a tube up to this little blue port. There are no needles, it just screws in. We have to scrub it with antibacterial stuff and wear gloves and make sure everything is super clean/sterile to change the antibiotics the several times a day that we do it. It doesn't hurt him at all. He doesn't like getting the PICC line because that does hurt a little and he is restrained for it, but once its in, it doesn't hurt him at all to get his treatments. 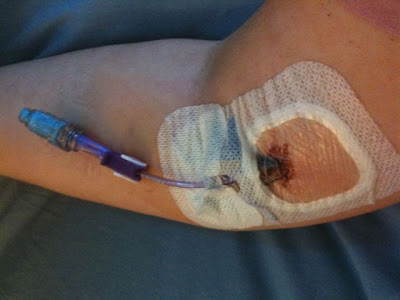 So there you have it. Let me know if you have any questions!