This past Thursday I had the honor of attending the Celebrity Waiters Fundraiser benefiting the Cystic Fibrosis Foundation. I had agreed to volunteer at the event...before I even knew that the Lachey brothers would be attending! I must say that having Nick & Drew Lachey at the fundraiser was the hit of the event! It was the 25th anniversary of the event and was moved this year from a luncheon to a dinner gala. There were about 250 guests there to honor the woman who started the event 25 years ago and to raise money for a good cause. The folks who attend the event are mostly local business owners or otherwise independently wealthy folks who have some money to throw around. I wish more CF families could attend, but honestly we couldn't even afford to go. I guess it doesn't really matter whose there, as long as they're giving their money to the CFF!
The night started with some speeches and then turned to the live auction. This is where Nick Lachey made a BIG impact. He made some big bids on some not so big items. He also agreed to golf with the Bengals head coach and two guests of your choice, and if the bidding hit $2000 he agreed to double it if someone would match the bid. And they did! I think that close to $20,000 was raised during the live auction alone. The silent auction and the balloon auction were also both hugely successful. I can't wait to hear how much was actually raised all told, but I know it was significant.
I had the chance to talk to both Drew and Nick and tell them about my Drew. I thanked them for being at the event and let them know how much I appreciated their support for this cause. Here are a couple of my favorite pictures from the night: 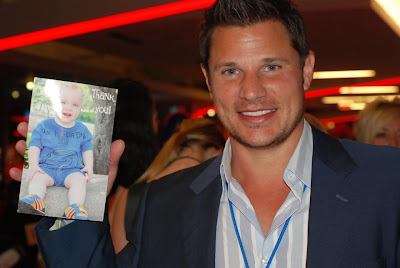 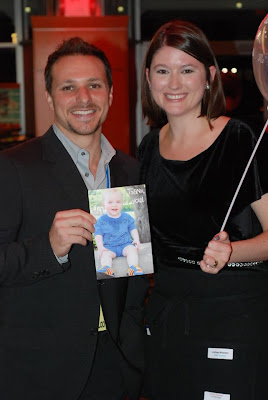 There were a handful of doctors and other caregivers from the CF Clinic at the event as well. Its always amazing to see the effort that they put forth to support their patients and their families far beyond the doctors office. I spoke for a while with Drew's old doctor. She was talking about how they had been discussing getting a few parents on board with them as part of a process improvement team. I LOVE the idea and want nothing more than to be a part of it. It sounds like something that they will be trying to get kicked off at the beginning of the new year. My philosophy on the whole world of CF has always remained the same - the more I know, the better off we are. Any doctor who knows my name or any advocate who gets to hear my message or any parent or friend or whoever shares information with me or I with them, the more I know and am known, the better off we all are.
I'm participating in tour of the Cincinnati Children's CF Research Facilities led by the one and only Dr. Clancy on the 29th and I couldn't be more excited. I can't wait to see firsthand whats going on behind the scenes and hear from one of the top CF researchers in the country where we are and where we're going. I will definitely be blogging about that after it happens.
Some of my husbands family will be coming to town this week to join us for Thanksgiving. Its nice to be able to stay at home and have family around to celebrate with. I'm looking forward to a relaxing week with lots of food and maybe a little shopping. I hope everyone has a wonderful Thanksgiving and I'll be back soon!