Happy Birthday Babies! And Part 2 of my Conference Post

The twins turn 3 today! That means 3 years ago today, we joined the CF community, though we didn't know it for another two days. It's not one that you'd ever ask to be a part of, but once you're in it you realize that it's one you couldn't live without. The way that this disease has changed our lives - the good, the bad and the ugly - has been so incredible. This year, we made it to CHOP, we made it to Disney World, and we're down a tooth, but all things told it was a pretty great year. Through Drew, and all of my kids really, but especially through Drew and this journey with Cystic Fibrosis, our lives have been truly enriched in ways that most people could never understand. A few quick picks of my boy Drew and his best bud, Lily Grace :) 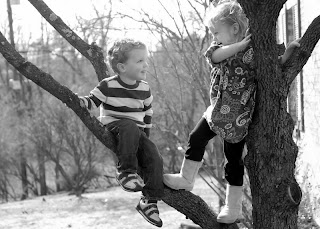 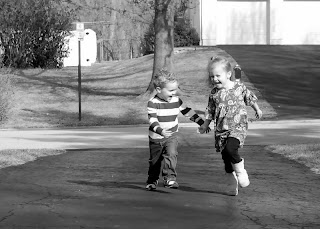 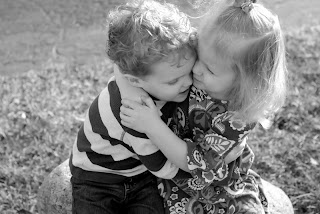 I mentioned above that the life that we live with Cystic Fibrosis is one that not many could understand. I have a wonderful family, immediate and extended, and a truly terrific network of friends all across the country and beyond, but few of them know what we do day in and day out to keep Drew healthy. And I don't just mean the 2+ hours of treatments every day or the half-day long appointments we go to 4 times a year. I mean everything from the fights with insurance and the fears of catching a new bug to the psychological struggle of "Oh God I hope I'm not totally screwing this kid up" while you try to make decisions that will both keep him healthiest while allowing him to be a kid. We struggle with friendships, knowing that the ones that we have are great and that our friends understand that they can't come over if they've got a runny nose and that for good parts of the winter we don't do the playland at Chik-fil-a, but there are new friendships to be had and the teaching that needs to go on to help them understand is a lot of work. There's a stigma that a coughing kid is a sick kid. I am guilty of judging the kid at storytime who sits there hacking away, wiping their nose on their sleeve, trying to decide if we should move to the other side of the store or just leave altogether. I know that we are judged as well. There's that struggle that a parent has to go through where you have to suffer the loss of what you had hoped for, that being a healthy kid. And you get angry from time to time, but it happens year after year, when all that you want is to not be in this anymore. But you are, and you realize how much work you've already put in and how you're never going to stop fighting for your kid. So just keep on going. I'm so ready and so energized to keep on going, harder and faster than ever before.

I met so many parents like me this weekend. I met so many admirable people, fellow parents, grandparents, friends, folks who had absolutely no connection to CF who were there to learn more about how they can help. It all started when we checked in and the "theme" of the conference was Mission: Possible. We started with Bob Beall and Preston Campbell talking about what's currently happening with the foundation. And folks, let me tell you, we are in a good place. Right now 4% of the CF population is being treated with Kalydeco. I had the opportunity to talk with several people whose children were on Kalydeco and it was amazing, but more on that later. We talked about the changing mission of the Foundation and their developing strategic plans, which I must add, seem to line up pretty much directly with what we're talking about with the C3N. They are focused on collaboration. They recognize the changing nature of healthcare and want to stay ahead of that curve. To quote either Bob or Rich, sorry I can't remember who said it, "You can either manage change or let change manage you". What an awesome perspective they have! We talked a little bit about the drug pipeline and all of the wonderful drugs that are in it right now, and all the are still coming. With so much focus on the "corrector" drugs, it's important to know that they haven't lost sight of the treatments as well.

After the first general session, we broke out to talk about individual or corporate giving campaigns. We chose individual and I'm glad that we did. We talked about strategies for growing our network and raising awareness. I've often been intimidated and perhaps even annoyed when pressed to give more or to ask for more, but I get it now. The most remarkable part of this session was that the chair of our Annual Giving Campaign and a member of the Board, Rich Gray, lost his daughter to Cystic Fibrosis. He doesn't have to be there doing any of this. He's doing this for us and it was inspiring.

We talked next about the strategic plan of the Foundation with their COO, Rich Mattingly. One of the most powerful things that he said, and he said a lot of powerful things, was this: "In order to succeed, we're prepared to fail and learn from that failure." They will continue to take chances for us because the learning that they obtain from those failures drives innovation. They have also recognized the need to incorporate everyone's ideas in order to succeed. I was so, so very impressed with everything that Rich and Bob and Preston shared with us about this incredible foundation.

That evening, there was an awards ceremony that was humbling. The lengths that folks are going to and the amounts of money that they are raising to help us fund the cure is astounding. It made me want to do more.

The next morning, we heard from about the Patient Assistance Programs that the foundation has, as well as from the Government Affairs team, talking about the work that we do as advocates. Many roll their eyes or just simply pass by, but every little thing does matter. Every email that our elected officials receive does add up to a big message. You might not see it, but I do. I'm always looking for people to help with my advocacy efforts so if you're reading this and interested in any capacity, no matter who you are or where in the world you live, click that word "advocates" and you'll be helping.

Not to diminish the last few parts of the event, because all things told it completely blew my expectations out of the water, but I'm really anxious to talk about my favorite part of the event. It started with a couple from Colorado, the Elders, introducing themselves to us right before the March on the Hill started on Thursday morning. They had heard that we were from Ohio and they came to tell us about their son who now goes to school in Ohio. Their son has Cystic Fibrosis. Their son also has the G551D mutation. You know, the one Kalydeco works on. Anyway, their son had always been in pretty good health and after graduating college wanted to go on to medical school, but was being turned away because of the risks that being in a hospital setting posed to someone with CF. Enter Kalydeco. Last February, their son got a prescription for Kalydeco. He took his first pill at 8:30pm. At 3am he came banging on their bedroom door and they expected that something terrible had happened. He burst into their room and said, "I can breathe! I can breathe and I can smell and I've never in my whole life felt anything like this before!". I cried. His PFTs (lung function) went up something like 19% and he was living a life free from Cystic Fibrosis. Incredible. But even more incredible was the fact that since his health had improved so dramatically, he was accepted into Wright State in Dayton, OH and is hoping to become a doctor. That's when I just sat there and thought to myself, "Holy crap, this is really going to happen for us. Our cure is really coming."

There were several opportunities to just talk with the other conference attendees throughout the weekend and it was during those times that I learned the most valuable things. I met an amazing man, Peter Hodge, whose daughter Olivia also is taking Kalydeco. Peter doesn't need to fight anymore, he has his "cure". But Peter works harder than any other fundraiser out there, raising the much need money and awareness for this disease. At the end of the conference, with tears in his eyes, Peter said, "I will work harder than ever this year so that all your loved ones can enjoy the same success as Olivia." When our cure comes, if it helps only us, or if it helps most of the rest of the CF community, I will continue to fight for anyone that needs fighting for, and I mean it.

Another remarkable woman I met there was Angie Kinney. Angie is the mother of two girls who have Cystic Fibrosis and she is an amazing advocate. Angie worked with the CF Foundation to create this moving video - its worth 2 minutes. And if it moves you, check out my link on advocates :)


I could seriously just go on and on about all of the wonderful things that happened and all of the wonderful people that we met while we were in DC. There wasn't one single take away, but rather a whole arsenal of valuable information, great idea sharing and incredible opportunities to network with other people who "get it". I hope that we can continue to go back, year after year, and maybe one year, not to long from now, share the story of the first time our son took his first deep breath.