That time I went to the White House (part 2)

On Friday, January 30, 2015, I arrived at the White House (yes, the one the President lives in) at 9:30am. I found some of our CF Foundation Leadership already waiting at the gate along with Bill Elder, an adult with cystic fibrosis who benefits from Kalydeco, the life changing drug that essentially cures cystic fibrosis in the 4% of CF patients who have the specific genetic mutation that it treats. I was introduced (or in many cases introduced myself) to anyone who looked even mildly familiar. I met a Nobel Laureate from MIT, the founder of a startup that is finding new ways to use "big data", and the current director of the National Institute of Health and discoverer of the CF gene in 1989, Francis Collins. He was in line behind me at going through White House Security, and when I saw him, after I did a double take, I introduced myself and asked him if he would mind taking a picture. What an incredible honor and privilege to be at an event, at the White House, with the man who made one of the first and certainly most remarkable discoveries affecting the CF community.

This is the post about the details, and I'm going to give you the nitty gritty, because if I hadn't been there but I knew someone who had, I'd want to know.

You would think that they would have a lovely holding area for White House guests, perhaps something more than your run-of-the-mill tent equipped with a space heater and a few secret service agents. Alas, they do not. They do however have multiple tents, where they perform the exact same security measures multiple times.

If you make it through the tents, you enter a small building with signage that indicates that there are dogs inside. Behind a large screen that you cannot see through, you walk past one or many K-9's toward a metal detector and an X-ray machine for your personal belongings. This is no nonsense. They're not smiling or asking about your day. If push comes to shove, these folks will give you the shakedown.

And then you're in. 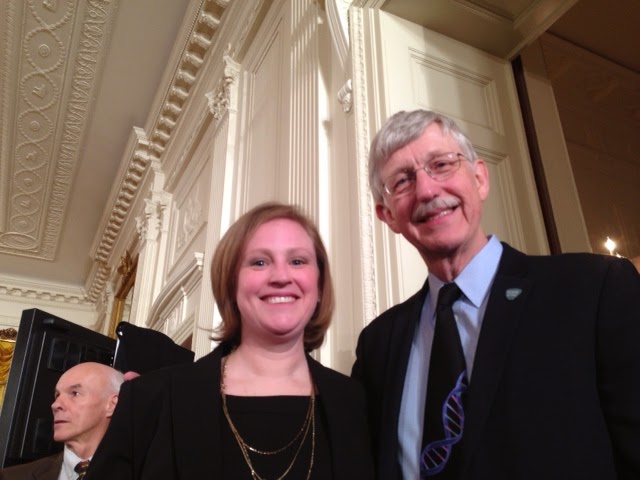 Francis Collins, Director of the National Institute of Health and Scientist responsible for the discovery of the CF Gene 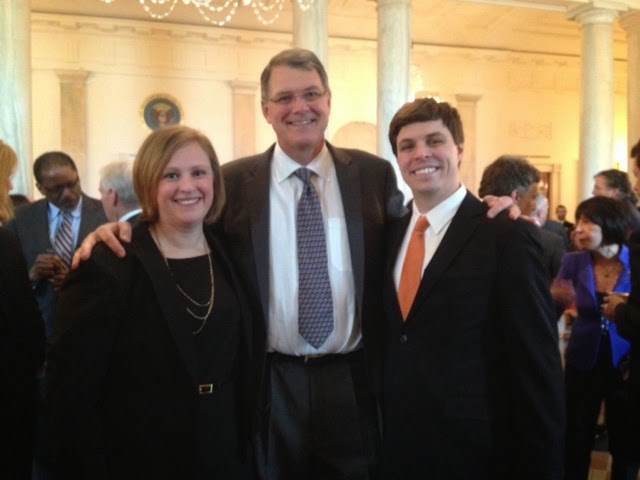 Me with Preston Campbell, SVP of Medical Affairs at the CFF and Bill Elder, an adult with CF

When I walked into the White House (THE WHITE HOUSE!!!!!!) I saw the President's dogs, Bo and I have no idea what the other ones name is. I'm not a dog person, but still, I saw the dogs. 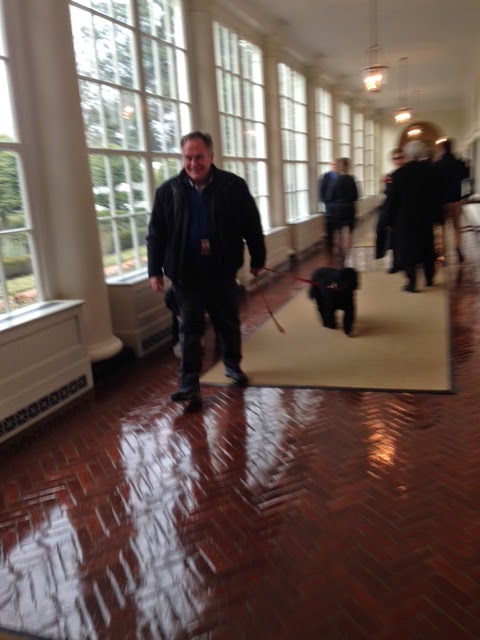 There were Marines around every corner donning their dress blues and referring to everyone as sir or ma'am. There was a coat check further down the hallway where we saw the dogs. Everything was so historic and pristine! We made our way upstairs to the reception area where they had coffee (White House coffee!) and water. I passed on the drinks for fear of spilling on my outfit. The was a marine playing a beautiful historical looking piano as people milled about, introducing themselves to one another and sharing their excitement for being invited to such a cool event.

After about an hour, another set of doors was opened leading to the room where the announcement was to be made. We filed in and found our seats. The only seats that were assigned were the guests of honor, those patients and families who had attended the State of the Union the week before as guest of the First Lady. They go the front row. Let me just repeat that for a second - PATIENTS and FAMILIES sat in the FRONT ROW. Not the second row. Not mixed in with the crowd. The very front row. That in itself spoke volumes. There were probably 6 rows in the front section followed by an open aisle and then the remainder of the seating. I was in the first row of that second section. Here was my view, panoramic style:

There was an announcement made to silence all devices, and a hush fell over the crowd. As we anxiously looked around the room, I caught the eye of one of the marines who whispered to me that as long as the piano was playing the President would not be coming out. I felt cool for being in the know.

A few minutes later, the piano stopped, the patient/family guests of honor were ushered in, and an announcer said, "Ladies and Gentlemen, The President of the United States of America." 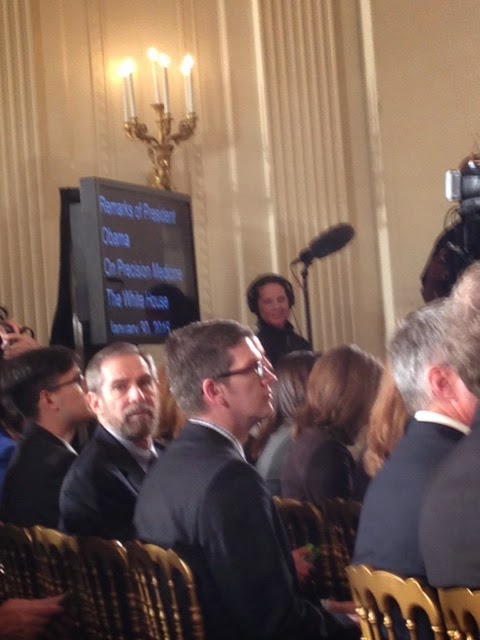 The teleprompter that read Remarks of President Obama on Precision Medicine, The White House, January 30, 2015.

To borrow a nice summary from the S4PM website, "The initiative begins with a budget request for $215 Million in new funds. The funds will be used, mainly at the NIH, to: 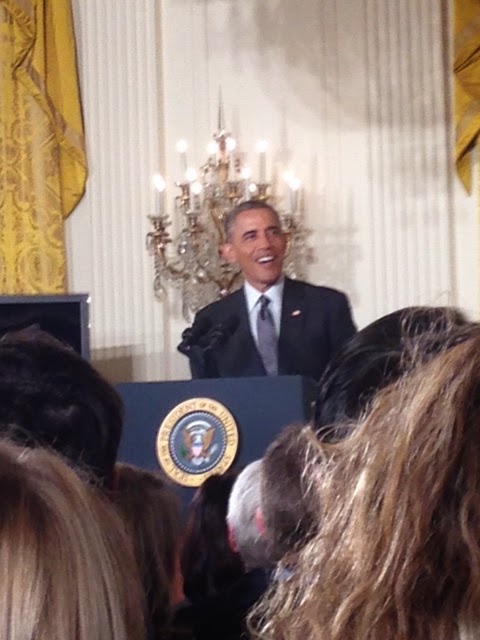 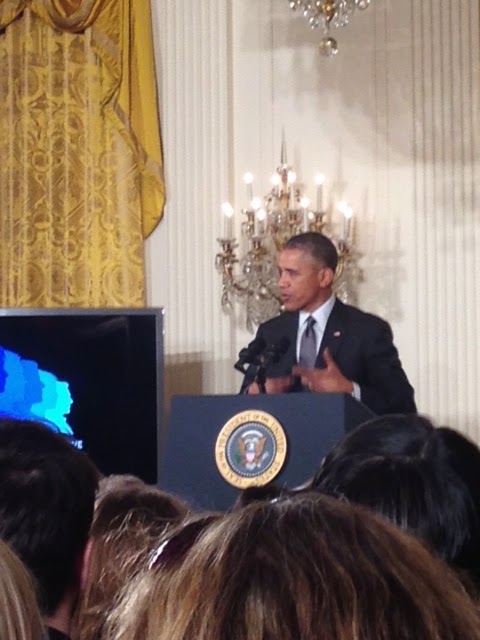 Because Cystic Fibrosis is such an incredible example of the value of personalized medicine, treatments that target specific genetic mutations, one of the VIPs was an adult with CF, Bill Elder. Bill was a guest of the First Lady at the State of the Union, and was invited to attend this event as well. President Obama highlighted the success of Kalydeco by sharing Bill's story. I was able to get a video of it so check it out:

I may not be Mr. Obama's biggest fan. However, this announcement and the proposed commitment to advancing this initiative is the first step toward progress in curing a disease like CF. Congress must still approve this budget. We will need to learn more specifics around the proposed initiatives. We will have to get a better understanding of the resources available to push this forward. But it's a start, and it's further than we have ever before been with support for addressing the extremely personalized needs of patients with specific genetic mutations in CF and other rare and orphan diseases. Here is a fact sheet that the White House released post announcement: http://t.co/bOoYqBzhrr.

Best parts:
The talk was about 10min long. At its conclusion, there were a few handshakes and pictures with the folks in the front row before the President was gone. We came, we saw, we left. Let me tell you those marines mean business when it comes to ushering you in and out of the White House!

Following the announcement, I was invited to a luncheon with a handful of other patients and patient advocates pretty close to the White House, and it was equally as amazing. I met some seriously incredible people, including a guy who found his own brain tumor by accident and had a 3D printout of it in his pocket, a woman who created a remarkable registry for a rare disease that her children have, the always amazing Emily of Emily's Entourage (who just recently did THIS) and many others. We talked with some of the folks who work at the White House Office of Science & Technology Policy about what we thought some of the major hurdles might be. Chief among them were privacy issues and the need for updated IRB protocol. The whole thing was like one big highlight in my life, but one of my favorite parts was definitely getting to spend some more time with Francis Collins. It was such an intimate group of people at this lunch (maybe 25-30 people?). Francis Collins had us go around the room and introduce ourselves and say 3 words related to how we were feeling about the announcement that we had just been a part of. There were lots of "hopefuls" and "readys", a few "desperates" and even a handful of concerns related to the funding and the resources available to do this. When it came back to Francis Collins, this is what he had to say: "I've been dreaming about a day like this. We are all in this together." He went on to ask us to work with them, to share with them all the work that we are doing so that they can learn from us, saving time and money by not having to recreate the wheel. He asked us to speak up and let them know when they're doing something wrong, and then work with them to make it right. "We are all in this together." Indeed we are.

I'm hopeful. I know that there is a long way to go, but we finally have a stake in the ground, a starting point. This experience definitely ranks near the top of my list of coolest things I've ever done, and I do hope that this really is just the beginning!