In sickness and in health, for as long as we both shall live

I mentioned in a prior post about the value that I find in tracking my sons data. I wanted to share a presentation that I recently gave at Genentech about how we have used the data that I collect in combination with our doctors expertise to personalize treatment options for Drew that help us to best manage his health. This is an example of how I use Orchestra. 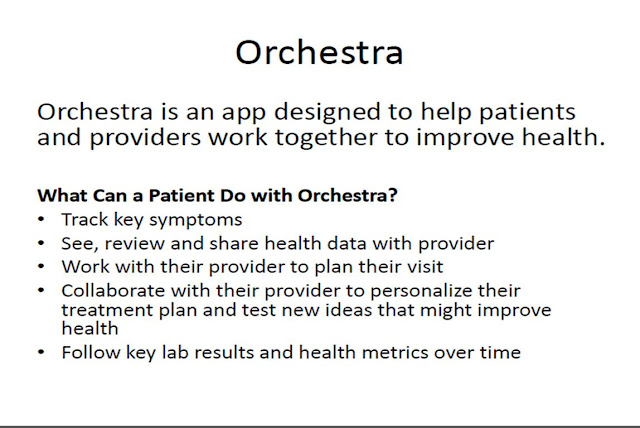 Orchestra is an SMS based patient-management and data visualization portal which improves the current model of decision-making and collaborative care in the clinical setting by delivering relevant information to patients, parents and clinicians to help everyone prepare for a productive clinical interaction and help patients answer the question, “What can I do to improve the outcomes that are most important to me?”.

This is an example of the dashboard that I see in the app showing me the metrics that I've chosen to track. 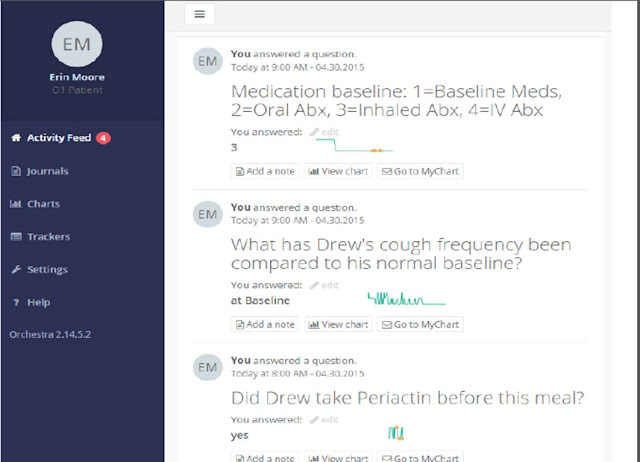 And this is an example of the kind of output generated from answering daily text messages about different aspects of Drew's health. 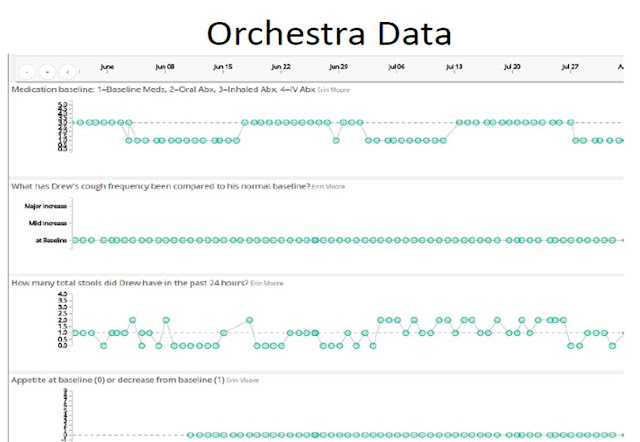 Around the beginning of March, Drew developed a cough. It wasn’t like his normal cough, though I couldn’t put my finger on how it was different. The frequency wasn’t the same as it has been with other infections. The sound of the cough, something that I can’t quite yet quantify, was different – not totally wet and junky, not exactly tight. His appetite was down. I had talked to his doctor and we decided to try an oral antibiotic. After a few days it wasn’t seeming to make a difference. Then on March 24th we decided that he needed to try IV antibiotics to see if we could kick this. You’ll notice that throughout the course of IVs his cough still didn’t return to baseline. 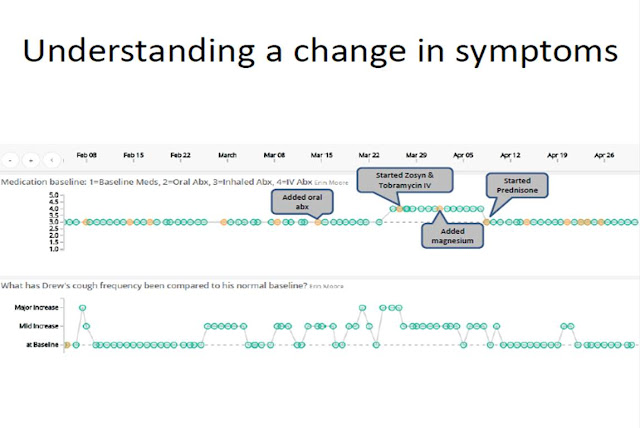 We were asking questions like “Did we choose the optimal combination of medications? Is there another treatment that might help better? Are we missing something?” We added a magnesium supplement about a week after we started the IVs, and then upon completion of the IVs tried a steroid. All seemed to maybe help a little but weren’t bringing him back to his baseline.

Through all of this, both his doctor and I are monitoring his symptoms through Orchestra. I decided that for a few days I would track his cough frequency in the morning, afternoon and evening to see if we could identify a pattern. I didn’t. 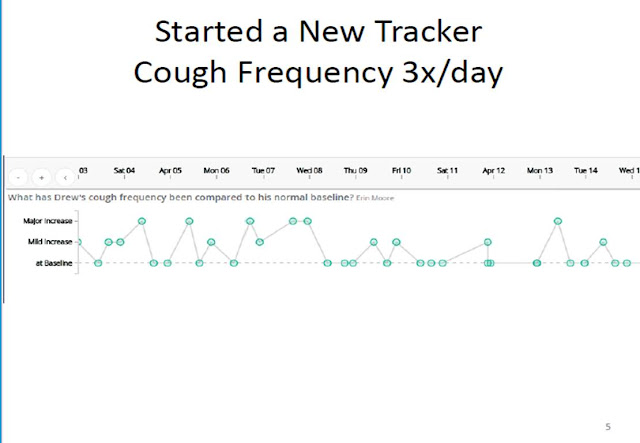 Around April 19 we agree that we don’t know what’s going on. She suggests that we may need a hospitalization if these symptoms are going to continue so that he can be monitored more closely. Desperate to not be admitted, I start digging into my data to see what might have happened around the time that this cough started.


The only change that I was able to note was that we had stopped Prevacid on February 7. He had always been on Prevacid and we decided to take him off of it to see if it was something that he needed or could do without. And when I asked the care team how we would know if it was working, they said that we would notice a change in his bowel moments. I didn’t think anything of his cough. I shared my findings with his doctor and we agreed that restarting the Prevacid was not a bad idea to try. 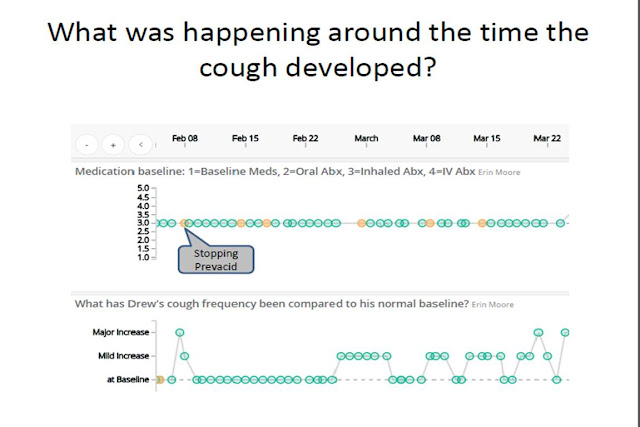 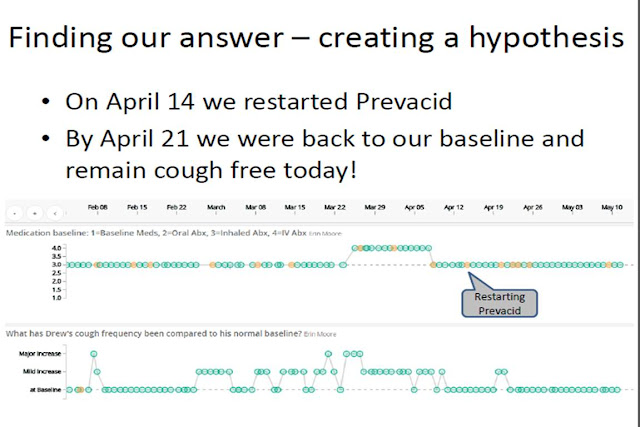 We restarted Prevacid and just a few days later his cough was completely gone and remains gone today, three months later. This self tracking doesn’t give us the answers but it helps us to identify the questions to ask, to create a hypothesis. This is about personalized treatment options. Tracking his data like this allows us to do experiments in an N of 1 style, thinking of things to test on our own, optimizing treatment plans.


Drew isn’t an average and he doesn’t always fit into the protocol designed for the averages. He’s an individual and having this data has allows  us to better treat him as an individual. It has improved our shared decision making abilities with his doctor and has allowed us to focus on understanding what works and does not work for him. 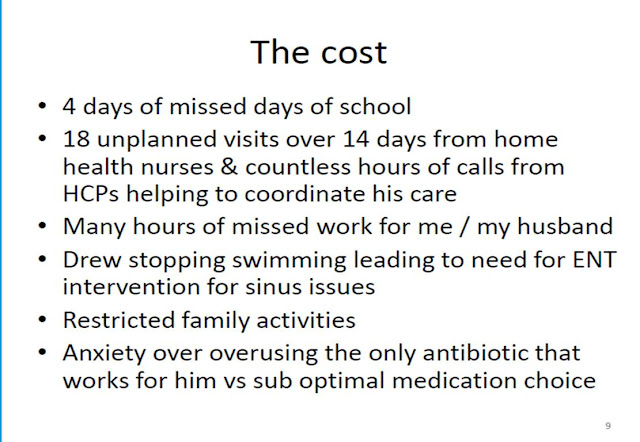 We can argue that 4 days of missed preschool isn't a big deal, but to a 5yr old who sits for 3 hrs a day doing breathing treatments, getting to school is his lifeline.
When Drew was 2 he had sinus surgery and I remember the surgeon suggesting that he get into swimming as he’s seen it as one of the best ways to keep the sinuses clear. He’s swam twice a week every week since then, except for when he is on IV. When Drew is on Ivs, he has a PICC and cannot get it wet. His sinus symptoms return every time he is on IV antibiotics, prompting the doctor to suggest a visit to the ENT who will undoubtedly suggest surgery. The ENT has told us that there is no scientific data to suggest that chlorine shrinks polyps, yet when we put him back in the pool the polyps vanish and his  symptoms disappear.
Drew missed spring break to because we are on Ivs and cannot travel more than 60 miles from our hospital for medication delivery and emergency purposes.
Drew is colonize with a bacteria called Achromobacter. It only responds to 1 antibiotic, which is terrifying because he is 5. Every time we are faced with the decision of starting IV antibiotics, we must weigh the risks/benefits of using this medication for fear that he will become resistant to it. Sub-optimal medication choice however often leads to longer than expected treatment periods as a sub-optimal choice produces sub-optimal results. Those decisions weigh heavily on all of us.
This self-tracking has made me more aware of my sons unique needs, and using this collaboratively with our doctor has helped to improve both his health and care. Monitoring his health and having a good understanding of what he looks like when he is well allows us to better treat him when he is sick. This is able keeping Drew alive and well, in sickness and in health, for as long as we both shall live.