I was watching a Great Strides video the other day about a little girl named Lilly who has CF. Her mom used the song "Just Breathe" by Pearl Jam in her video, and I loved it. You can click below to play it while you read whats on my mind this morning.

I have been doing a little research on Drew's mutations, mostly because I haven't in a while and I just wanted to make sure that I understand what he's got going on. I'll take a step back first with a little bit of the biology on CF mutations. This info is probably going to take you all the way back to middle school, so bear with me :) Remember those genetics charts - aka the Punnett Square? Here's a picture to refresh your memory 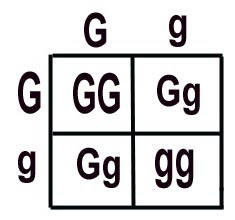 That's how the genetics of Cystic Fibrosis work. Martin and I are carriers. If you think of the big G as the dominant trait and the little g as the recessive trait or the "mutation" in the gene causing it to not work properly, we each have one big G and one little g. Together, a big and a little do not equal the disease. Two big G's would mean that you got two of the dominant genes and therefore none of the "mutations". One big and one little would make you a carrier - like Martin and I are. We each got 1 dominant and one recessive gene from our parents. To get the disease you would need two little g's. Drew got my little g and Martin's little g. Make sense?
So now the crazy part of CF. There are thousands of kinds of little g's. (And for the record, the G's are demonstration purposes only, absolutely nothing to do with CF whatsoever). The two that Drew has are called ΔF508 (or Delta F 508) and R560T. ΔF508 is the most common CF mutation while R560T is more rare. Not all CF mutations cause the same problems, which is one of the challenges that doctors and researchers deal with in their search for treatments and a cure. All of these thousands of kinds of mutations are grouped into 5 classes based on what complications they cause. To make things even crazier, everyone with CF has TWO mutations (or they wouldn't have the disease) and the combinations of mutations from different classes makes it near impossible to pinpoint how a person is going to be affected.
We all know (or will after I type this) that the cells in our bodies (yes, yours and mine) all transport chloride as part of their job. The main problem with the mutant CF genes is that the cells in a persons body have trouble regulating the chloride that moves in and out of a cell. Without this chloride working properly, the mucus that is in our bodies gets too thick causes buildups, causing problems where mucus is critical - our lungs, pancreas, and intestines. You may not think of mucus as critical to these areas of your body, but it is, and very. You just don't recognize it as "mucus" in its typical form, because you don't see it. Its just a slippery substance thats in there helping everything to move along just as it should. In CF, this is not the case because the mucus is like mucus as you think of it when you have a terrible cold and are all snotty and gross. The mucus in Drew's lungs and gut are all just thick and sticky and don't allow things to move the way they need to, leading to life threatening infections.
The thousands of different CF mutations have been put into 5 classes. I promise I'm going somewhere with all of this so bear with me. Take a look at this chart below. 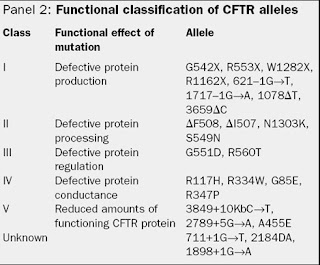 Here's the quick and dirty on what that chart means in picture form. This is from Johns Hopkins. Its a little tricky to understand, but try to follow the picture. In normal cells, the CFTR (Cystic Fibrosis Transmembrane Conductance Regulator) protein acts as a channel that transports chloride into and out of cells, and regulates the passage of salts. The CFTR can also transport other ions and chemicals such as bicarbonate. 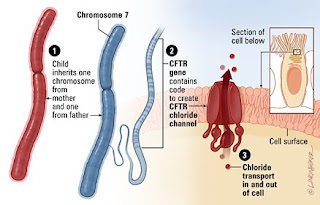 The first picture is a normal cell. If you can follow, the chloride is the little red/purple dots. They move normally in and out of the cells as they should. Now look at the picture below to understand some of the different classes of CF mutations. All work a little differently, but basically prevent chloride from being processed appropriately in some way or another.

Class 2 mutations
Defective trafficking of CFTR so that it does not reach the apical surface membrane where it can function.

Class 3 mutations
Defective regulation of CFTR even though it is able to reach the apical cell surface.

Class 4 mutations
CFTR reaches the apical surface but chloride transport through the channel is defective.

If you've been able to keep up thus far, you might now be starting to see how some of this gets complicated. Because everyone has TWO mutations in order to actually have CF, those mutations often time, as in Drew's case, fall into different classes. This poses a problem for researchers and doctors as they search for the cure. Uncertain of which mutation to treat or how to treat the many many combination to get the cells working properly. A lot has been done, thanks to your donations over the years, to figure out how to correct these problems. There is a cure for CF, but the research has not yet been able to determine how to make it stick inside of a person. That's how close we are.
So a couple of weeks ago I posted this article about a new and exciting drug which corrects the basic defect of one of the mutations of CF. The study was done on a mutation known as G551D. Well, mutation G551D falls into Class 3 of the mutation, the ones that have trouble regulating chloride. The new drug that should hit the market in later 2011 or early 2012 corrects this regulation problem, getting chloride in and out of the cells the way a normal persons would. Mutation R560T, one of Drew's mutation, also falls into Class 3. (I'll give you a moment to get excited if you can see where i'm going with this).....
So I emailed one of Drew's doctors this question - So the new drug that's going to the FDA for approval was tested on people with the G551D mutation. Drew has f508 and r560t and the r560t is in the same class of mutations as g551d. Do you know (or think) that that drug might be affective on all mutations in that class since it seems to correct the protein regulation? Thoughts? I know that no one really knows anything for sure, but does it seem like it might be a reasonable assumption to make?
This is the answer I got in two parts.
Part 1 - I looked into the question about VX-770 (the new drug coming to a pharmacy near you in 2011-2012) because I could not remember all of the details. You are correct that the G551D is a mutation that causes the CFTR (chloride channel) to get to the cell membrane but it does not pump chloride appropriately which is similar to Drew's R560T mutation. VX-770 "potentiates" this defective CFTR and allows more chloride to be pumped out of the cell. I do not know how the drug is able to potentiate this channel so I am not sure if VX-770 will be able to work on Drew's mutation. Luckily we have one of the lead researchers on CFTR mutations and drug development here at Cincinnati Children's, Dr. J.P. Clancy. I sent him an email and will let you know what he thinks. Of course as you said we will not know for sure unless we do studies on the other mutations as well. However, if the drug works to fix the channel that is independent of the specific mutation, then it may be a reasonable assumption that the drug will work for Drew as well. I believe the drug had the most effect on cells with the G551D mutation, which is why they studied it further in children/adults with this mutation.
Part 2 - Dr. Clancy got back to me about the possibility of VX-770 working on the R560T mutation. He said that the drug appears to work on multiple CFTR mutations and there is currently a project going on to look at its effect on the top 200 mutations. He seemed to think that if Drew's R560T abnormal chloride channel could get to the membrane of the cell, then there is a chance that the drug could help the channel function. As opposed to his DF508 abnormal channel which has a problem getting to the membrane of the cell. There is another drug being investigated to try to help the DF508 (Drew's other mutation) abnormal channel to get to the membrane. I tried to find out more information about the R560T mutation but I could not figure out if it gets to the membrane. If it is in the same class as G551D I would expect that it is able to get to the membrane, but I can't say for sure.
I'll take that! If the lead researchers on the basic defect of CF thinks there's a chance, I'm willing to put some hope out there for it too. An outstanding question that we asked a few months ago that no one really has the answer to is whether treating one of the mutated genes would correct the problems that CF causes. It would make sense, in my head, because if you think about it, I have one mutated gene and Martin has one mutated gene - thats how Drew got CF - but neither Martin or I has any of the effects of CF. So since Drew has two bad mutations, theoretically, if one of them were fixed and he just had 1 of the genes not working right, he would be cured, theoretically. We wouldn't need hours of airway clearance and dozens of medications to keep his body functioning "normally". I'm hoping that the time is near when we just have to take a pill everyday to right all of the wrongs that these two tiny mutations cause.
So that's what I have to say about that today, just 3 days shy of their first birthday. I really cannot believe that on Monday my babies will be 1. I'll write more about it Monday. Until then, I will live high on the hope that a cure is imminent, with the help of your donations (heres the link!) and I will enjoy my weekend with family and friends celebrating the two joys that came into our life one year ago :)