An update on the bat, and Team Doin' It For Drew

The bat was taken away by the SPCA for rabies testing, but not before we had to get rabies shots. That's right, we're vaccinated against rabies now. Well, not all of us. The kids are. Martin and I are waiting until we get the bat results back and if hes positive then we will go. The second of 4 shots for the kids happens tomorrow. Its not the board of 40 needles into your abdomen like everyone thinks rabies shots are. Its a shot, like any other vaccine given these days, right into the thigh. You get one the "day of the incident", then again on days 3, 7, and 14. Then we're good. Well, we're good for this instance, but should we come in contact with another rabid creature at some point in our lives (which, give then craziness of all of this, I wouldn't rule it out) then we would have to go through the process again. This has got to top the list of most wild Friday the 13th's I've ever had.
Our Great Strides teams started walking this weekend! The walk in Connecticut was on Saturday as well as the walk in South Carolina. 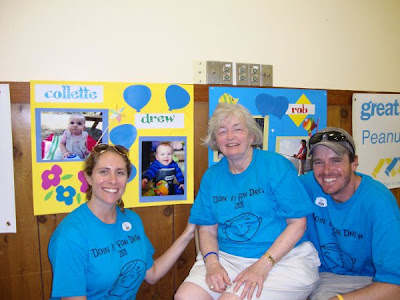 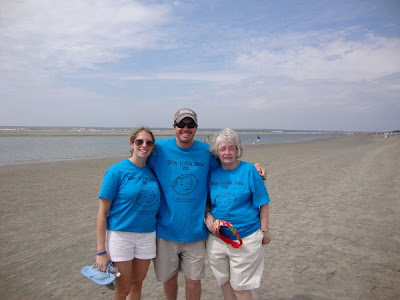 The South Carolina walk raised over $120,000, which was more than they raised last year. That's such great news for the CF Foundation, as I had mentioned that they were going into deficit funding to support the research and pharmaceutical companies as they push forward with what they're working on that will change the world for Drew and others with CF. Our team, as of today, has raised $16,005. Our original goal was $15,000, but then I doubled it. The foundation needs the money and they need us to raise it. I don't know if we will make it to $30,000 this year, but I'm hoping that by the end of May when all donations are accounted for, we will have over $20,000 credited to our team. That's awesome, but its not enough. To put it into perspective a little, look at this invoice for Drew's medications this month - 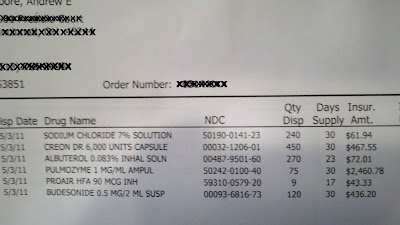 That's right - $3541. Look at the "Day's Supply" column. That's only a months worth of medication. Thank God for good insurance and supplemental state insurance that covers most of these bills. This is medication that Drew needs every day, several times a day. What if the state budget cuts the funding for the Bureau for Children with Medical Handicaps and I have to come up with cash for this? What about people who don't have good insurance and can't afford these drugs that their children need to live with this disease. What if there isn't enough money to fund the research that will cure CF? This is why I'm bothering all of you with letters and emails and fundraisers and everything in between. This is why I volunteered to be the State Advocacy Chair. I need to email our legislators and let them know why its important for them to keep these programs when they plan the budget for the upcoming year. I need to tell them to support the National Institute of Health and the Food & Drug Administration, the people who will approve that drugs like VX-770. If cuts happen, it will take longer for things like this drug to make it through the pipeline.
Not everyone cares about CF as much as I do. But if not me, who? That's why I bug you. That's why I ask for your help and support. I'm still looking for people to join me next week when we walk at Sawyer Point in Cincinnati and in Philadelphia and San Francisco with the hundreds of other families affected by CF. We would love you support now and going forward. It means so so much to us.