I had a really wonderful week. The kids all seemed to be getting along, sleeping regularly and generally not making me crazy. Jake started sleeping through the night (I got 4 out of 5 nights this week) so I was pretty well rested which definitely helps with the mood. Ella had some play dates on Monday and Tuesday and the other three all napped in unison so I was able to get quite a bit done around the house. I had two meetings at Children's this week as well, so getting out for a few hours on Wednesday and Thursday evenings was really nice too. I don't know if everyone was being extra nice and good and agreeable this week because next week they plan to unleash the fury, but regardless, I'm going into this weekend feeling really good about this past week.

About a month ago, I got an email from Children's saying that I had been nominated for a Making Difference Award. It actually brought tears to my eyes! I didn't know who had nominated me but was just so honored. I don't do all that I do for Children's and for Drew for any kind of recognition, but it does feel nice to know that someone has noticed and appreciates it. The award ceremony was on Wednesday night and oh man was it a tear jerker. The evening started off with awards being presented to families who had lost children but gone on to honor their legacy by continuing to serve the hospital through the creation of a foundation in their child's memory. Next up were staff members who had been recognized for their outstanding work in going above and beyond their responsibilities to help patients and families. I received recognition for the work that I do as a Parent TOUCH volunteer. Then they honored patients and families who were nominated by staff who feel that they are truly making a difference in whatever capacity it might be for their children and others in the hospital. I was completely shocked to receive a second recognition from Drew's pulmonologist! I often feel like I'm the most annoying parent on earth, constantly calling with questions and ideas and signing up for every seminar and meeting and opportunity they provide. But through receiving this award, I feel as though they really see value in all that I'm doing for Drew. They don't think I'm being annoying, but rather diligent and truly making a difference for Drew and other kids with CF through my cooperation and participation with them and the CF Foundation. To take her time to fill out a nomination and write up why she feels that I'm making a difference makes me want to give her my award. These doctors and nurses and other caregivers at Children's are like no people I've ever met in my life. THEY are the ones who are making a difference! They, every day, go above and beyond not only for Drew but for me, to answer my questions and to make me feel comfortable. They aren't just doctors and nurses. They are miracle workers and angels on earth and my life has forever been changed by my encounters with them. You hope and pray that you never have to go through something like we've been (and continue to go) through with Drew, but going through it really changes you from the core. You think differently and appreciate more. You don't sweat the small stuff anymore. And gosh does it open up your eyes and your heart to things you never thought possible.

I wanted to share some more information about the upcoming Goat Races that we're entering a goat in for CF. Here's the write up - not sure if my sister takes credit for writing this or for finding someone to write it, but props to her for the wit. If you can make it to this, it sounds like it will be a lot of fun. Hopefully CF gets some good publicity at this event and we can raise a little money for the cause 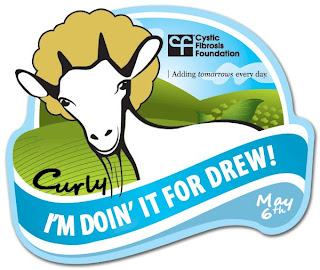 He once ran a marathon backward, just to see what second place looked like... His organ donation card, also lists his beard. "I dont always run races. But when I do, it's to fight Cystic Fibrosis. And for the beer...I really like beer." Jonathon Rembrandt Kennedy (aka Curly), the most interesting goat in the world, will make his debut run in this year's Sly Fox Brewery Bock Fest Goat Races. A goat of many talents, Curly is dedicating his race for the 'bock to finding a cure for Cystic Fibrosis. Curly will be "Doin' it for Drew," a 2-year-old suffering from the disease, and inspiration for Curly's own 'do. Visit Curly's tent at the race to find out how you could be "Doin' it for Drew" too!


With our walk in Cincinnati just a little under a month away, I've decided to do something a little crazy give that my schedule is already reasonable full. I've decided to sell Tupperware for fundraising. I don't mean like having a party, I mean being a consultant. I'm hoping to keep it as mostly an online business with an occasional party here and there for an extra boost. If you host a party with me (which can be as simple as posting a link or emailing your friends an online catalog), you will get a percentage of all of your party sales donated to your team or charity of choice. If someone has a party with me and doesn't have a charity, it will go to CF. And from now until the walk, i'll donate 100% of my profit to your CF team! You can live in south Egypt and still host a party with me, its not limited to people in Cincinnati. So if you're looking for a quick and easy way to make some money for your team, shoot me a note and I can get you set up. If you don't want to have a "party" be it online or in person, you can still buy Tupperware from me and have CF get a kickback from it. Just use this link - www.my.tupperware.com/erinmoore. I'm doing all I can to raise money for CF. Can you help?

Finally, if you haven't seen it yet, here's our fundraising video this year. I would love for you to share it and help us to raise awareness and funds for CF. To donate to our team, visit http://www.cff.org/Great_Strides/dsp_DonationPage.cfm?walkid=8060&idUser=377282