We have a pooper! 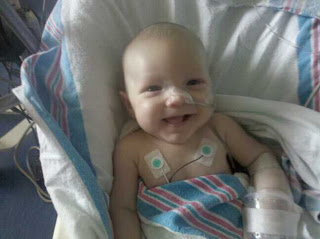 We've got poop! First time anythings come out the end its supposed to so we are beyond delighted. Let me explain.

As a quick recap, when Drew was born there was a blockage in his bowel that he was unable to pass on his own. This required surgery to remove the blockage. Unfortunately, the bowel was in rough shape, so they had to snip it in half and poke both ends out of his belly thus allowing the bowel inside his belly time to heal without having to process food and waste the whole way through - enter ostomy nightmare. On Thursday, he had surgery to put the two ends back together so that food (or formula) can pass through his system like it does for the rest of us. Before they could start to feed him again, they needed to see him poop to make sure that all of his insides were working the way they were supposed to.

Sidebar: FAQ
1) What is he supposed to poop out if they're not putting anything into him?
GREAT QUESTION! There are apparently some stomach acids and juices that the belly produces naturally with or without food. These normally just mix with your food and exit the body with the rest of your waste in the form of poop. We just needed to see something in his diaper to show that the pipes were working the way they were supposed to.

2) What would prevent poop from happening?
Drew has never used his colon. (it was just below where the bowel was cut, so everything emptied into the ostomy bag vs following the natural path down the rest of the bowel, through the colon and then out the butt). The colon's job is to remove water from your waste so if you didn't have one or it didn't work properly you would have chronic diarrhea. So because Drew has never used his, he has what they are calling a micro colon. Basically, the reservoir (colon) that holds the poop before it exits your body is super small, so they expect that he will both poop often and it will be mostly liquid, at least until the colon gets up to size and speed.

Back to the point, he pooped this morning! They didn't want to feed him until he pooped because if they are putting stuff in and it had no way out his poor belly would have gotten too full and he would have gotten sick. So this morning he pooped and now we are able to give him small amounts of Pedialyte every couple of hours until they are comfortable with the way all systems are working. At that point they will start allowing him small amounts of formula, and then work him up to full feeds. Then we are home free!!

We aren't really sure of the timing of all this. It really depends on Drew and how he does with everything. We are hopeful that it will all go smoothly and quickly and we will be home in no time. They had estimated 10 days to 2 weeks from the time we entered the hospital until the time we got to go home, but things are looking up and going smoothly so we are hopeful that it will be sooner.

I'm hoping this is the last post I ever have that includes the words "poop" or "ostomy". We seriously cannot wait until he is home and we don't have to deal with this anymore ever again. And to be clear, this whole issue was a complication due to the CF, but it is not a chronic CF issue. Once hes home and this is over it should be over for good. Nothing makes me happier :)