I'm going to attempt to describe through pictures the issue we're currently dealing with. First, here is a picture of the procedure that was done on Tuesday. They stuck a tube down Drew's throat and took pictures the whole way down through his trachea (windpipe) and into his lungs to see what the problem was. This is how they discovered the problem. 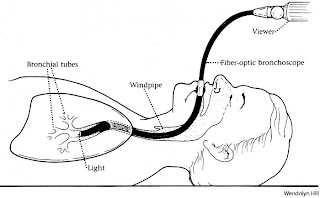 Your trachea is more or less round. Its a long tube leading from your throat all the way down into your lungs. Below is the shape of a normal trachea. If you pictures it upright, the rounded part (blue) faces out toward your chest behind your sternum and the flat part (brown) faces your back. 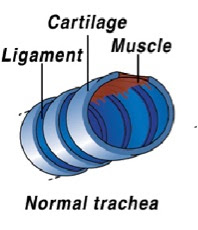 The picture below is an actual image taken during a bronchoscopy of a compressed trachea. So if you use the image above to visualize, the picture below is the same orientation. The arrows point to the back of the trachea (the brown part in the picture above, the part that faces your back). The black opening is the airway, and you can see its not round, its sort of squished. The shadow around the bottom of the picture is the area being compressed by something and making the airway the shape that it is rather than being open and round. Remember, in this picture you're looking down into the airway, so you're standing in front of someone looking straight down their throat. The bottom part of the picture is the front of the airway near the chest. That black hole should be round, not oval. If you can picture the shadowed area below the black hole being black as well, that would represent a normal trachea without the compression.

Drew's is even more closed. Frankly, they said they aren't sure how he's breathing the way he is given the condition of his trachea. 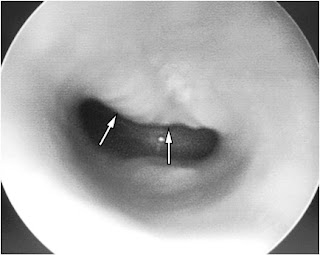 The other issues he has of the whole trachea not moving in unison when he inhales or exhales is a whole new can of worms. They aren't sure whats causing that and if it poses a serious problem. The plan is to take care of the compressed trachea and when hes open to take a closer look at the weird rhythm of the trachea and the "weird lungs". Hopefully they are not an issue, and this surgery will fix his sound and allow him to clear his airways more effectively.

Ask me questions if you have them. If I don't know the answer I will probably want to learn it so I'll find out. Hope this helps to clear things up some!