We are deep into the weeds of summer - hot days, exhausted kids, dirty floors - and we are embracing it. The girls are at camp this week which has left the boys a bit jealous, but we've been creating our own adventure by Geocaching. Its been fun to hang out with just the two of them for a couple hours a day, and I think its been a nice break for them too.

Ella turns 7 on Monday, not sure how that happened! And Drew and Lily start Kindergarten in the fall; separate blog post to follow on that! Jake still lives here too. We haven't yet lost him or given him away, though some days we are close to the latter. Three year olds are tough business.

Drew has been incredibly well (knock on wood). After that whole debacle in March/April with IVs and a cough that wouldn't quit, we figured out that Prevacid may have been the culprit and since hes been restarted on that he has been great. Even prior to us taking him off of Prevacid back in February we weren't the most compliant. And not for any particular reason, simply because we would forget to give it to him. We've never missed a dose of Creon or a breathing treatment, but that Prevacid and 3x a week Azithromycin is impossible to remember! When I made the association between this increased cough and decreased appetite using my Orchestra data and we restarted the Prevacid, we have been religious about its use, and not only has his cough been non-existant but his appetite has also improved dramatically. For a while we were tracking what he ate with the help of our Better PHA (personal health assistant) and we've been experimenting with Periactin, an appetite stimulant, but I think that overall it may be the Prevacid that did the trick for us. There is no doubt that the PHA and Periactin have helped but we've been using both somewhat sporadically and his appetite hasn't changed. In fact, he's gained more weight in the past 6-8weeks since restarting the Prevacid that he did in the past 12 months!! 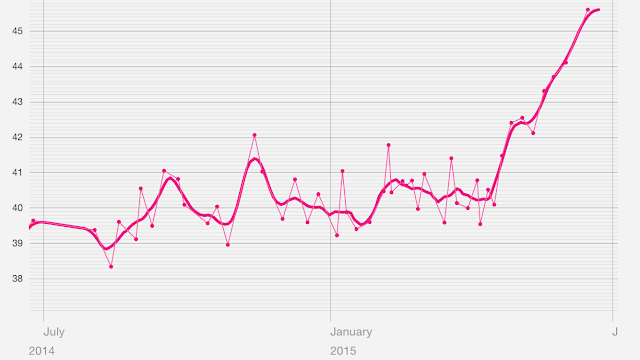 This is a graph generated by our Withings scale, a bluetooth scale that sends Drew's weekly weights to an app on my phone so that I can track it. I also enter this data into Orchestra so that his doctor can see it, and its been really helpful for us to identify changes or the need to intervene, whether it be with an appetite stimulant or just more Ensure Plus!

I was having a conversation with some of the people I'm working with to design the CF Care Model of the Future (the CF C3N), and we were talking about the benefits and risks of using data and devices like this to self monitor. Someone brought up the point about insurance getting their hands on this data, and while I can certainly appreciate the risks, I think the benefits outweigh them. For example, our insurance company does not cover Ensure Plus as medical food, but will cover high calorie formula that's administered through a g-tube. Drew doesn't have a g-tube and I hope that he won't ever need one, but the cost to insurance of a g-tube must be greater than a monthly order of Ensure plus. I would gladly share this data with our insurance company to show what we are doing to help Drew gain weight which is keeping him from needing a g-tube. We spend roughly $140/month on Ensure plus, and without it Drew wouldn't weigh half of what he does. He drinks 4-6 of these a day, everyday, and while we have the means to get them for him, many people don't and their health suffers. Similarly with Drew's swim lessons. When he was 2 he had sinus surgery for severe sinus disease and the ENT told us that he would likely need surgery every 6-12months. I had heard in an online forum (Smart Patients) that swimming can help and I got Drew in the pool where he spends time every single week, except when he has a PICC line. His sinus symptoms only return when he has a PICC and can't get it wet, and they go away when the PICC is pulled and he gets back in the pool. I would gladly share my self-tracking data to show this correlation with the insurance company if they would support his YMCA membership. A sinus surgery costs more (financially, emotionally, physically) that a Y membership does! I'll have to share more about my overall experience with self-tracking and Orchestra, but for now my point is that it's been incredibly valuable for us.