And Lily's not happy about it either.

I spent another many hours on the phone with insurance yesterday. I swear that Anthem hires only incompetent people.
We got secondary insurance coverage from the state of Ohio under the Bureau for Children with Medical Handicaps. Our insurance is really phenomenal, and we met out deductibles and out of pocket max, oh, back in like April, but we still have co-pays for doctor visits and prescriptions. And we go to the doctor A LOT and use a LOT of prescriptions (by "we" I mean Drew). So the BCMH picks up all of those extras that are related to CF. So if we go to the pediatrician, we still have our co-pay, but when we go to see the CF doctors then there's no co-pay. I'm getting to my point.
BCMH will also cover our co-pays on all of Drew's medications, but only if we use the CF Services Pharmacy, an online pharmacy servicing only CF patients. But our insurance requires that we use their online pharmacy. So I had to call them to ask for an exception, allowing us to have our prescriptions filled through the CF Pharmacy. They pretty easily agreed. I called the CF Pharmacy and told them that an exception had been put into the system and I needed to place my order (which was going to cost me nothing!) and they said that a 30 day supply would be on they way. URGH!! I need a 90 day. The problem was that Anthem only approved an override for 30 days. So I call them back to try to get a 90 day and after being on hold for 21 minutes, the woman tells me they are having some trouble getting that approved and they'll have to call me back. Two hours later she calls back to say its been approved and the problem was that they were looking under my name and not Drew's, despite the fact that I gave them his birthday. Surely she didn't think I was born on 3/14 of this year. Whatever, we got it sorted out. So I call back to the CF Pharmacy because no one can do anything without you holding their hand, and we're all square. The woman asks me if its just the one prescription I need and I was like no I need these 3 that I spoke with someone about yesterday. Well, the order had never been placed. I asked what the confirmation number I had was for. Apparently the guy just made it up or something because they had no record of it. I tried to remain calm and just get everything ordered and before we hung up I said "Just to confirm, these are all for 90 day". She goes, "No ma'am, these are just 30 day, Anthem has not approved a 90 day supply." Really? REALLY?! Oh for the love. Fine, just send me 30 and I'll deal with you again in a month when I've gotten my patience back.
All of this time spent on the phone stressed me out. And Lily isn't happy about it either. 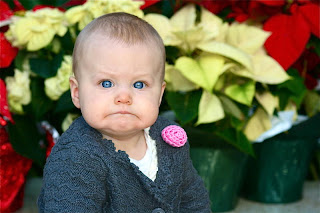