Drew got his first cold this week. I knew it was coming so we just embraced it rather than freaking out. The girls got colds too, so rather than panic and call the doctor right away, we decided that we should just let it run its course.
We had discussed with Drew's doctors the course of action that would be taken when he did get sick. They told us that they treat based on symptoms and that not ever cold would turn into a problem. They said that we would should just keep an eye on things for about 5 days, and if they weren't getting better or started to get worse that they would want to see him.
The cold started on maybe Thursday or Friday. I got nervous, but we just increased his CPTs to 3 times a day and kept an eye on him. He had a clinic appointment scheduled for Monday so I figured that they would be able to check him out then if things hadn't gotten any better. By Sunday he was sounding pretty rough and his breathing seemed labored so I was glad our appointment was at 8am.
The doctor listened to his lungs and said they sounded clear. He honestly sounded better on Monday morning than he did all day Sunday. We decided that it was probably just a cold, not anything worse, and that we would skip antibiotics. [clarifier - antibiotics wouldn't do anything for a viral cold, however the increase in mucus provides the perfect breeding ground for bacteria that would be killed off by the antibiotics] However, it was also decided that we should start using a nebulizer before CPT to moisten his airways and help to loosen the mucus. They gave us saline and Albuterol. We spend 10-15 minutes using the nebulizer now before we do his 30min of CPT 3 times a day. Thank God he is such a laid back kid. He doesn't seem to mind the mask on his face and it sure does make him sound better. It does kind of suck that we have to use it now but if it helps him thats whats important. 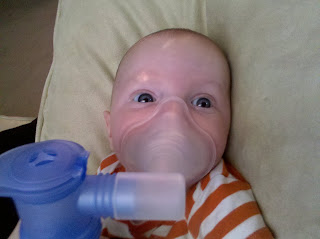 They also did a throat culture. They do these ever 3 months to see whats going on in his lungs. So far, there's only staff. It sounds horrible to me, but they say they expect it in CF kids. Bad things they could find include Pseudomonas. Its is a type of bacteria that is of concern for persons with CF. It causes frequent lung infections, which leads to damage to the lungs. B.cepacia is the really bad one. B.cepacia bacteria are often resistant to common antibiotics. B.cepacia poses little medical risk to healthy people. However, people who have certain health problems like weakened immune systems or chronic lung diseases, particularly cystic fibrosis (CF), may be more susceptible to infections with B.cepacia. B.cepacia is a known cause of infections in hospitalized patients. The effects of B.cepacia on people vary widely, ranging from no symptoms at all, to serious respiratory infections, especially in patients with CF.
Presumably nothing new was found with this culture. They said they would call by the end of the week if they saw anything, and we haven't heard from them which works for me.
He seems to be doing better. Hes still coughing a little more than normal but its always hard to tell what his normal is because its always going to be changing. But hes doing better so I'm happy.
.