Drew gets the award for first to roll over! He did it this afternoon shortly after waking up from his nap. I was sure that we were going to need PT to help him with things like rolling over and sitting up, just because he is a little weaker than Lily from the time spent in the hospital and the surgeries to his abdomen. But it sure doesn't look like that's going to be the case and that's delightful! He went from belly to back, and i'm pretty sure it scared the sh*t out of him because he started screaming at the top of his lungs after it happened. Then Lily started screaming, but I think mostly because she knew all of our attention was on Drew and shes a bit of an attention hog :). But I was so happy, so proud. It helps me to see that hes going to do all of the same things the girls do, that he going to be "normal". Love you, boy! 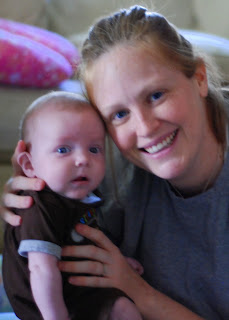