Seriously, is the boy at the top of this page not adorable? Oh my God I could just eat him up. You've never met a more loving little boy in your life. He is constantly handing out hugs [to his sisters who don't want them], asking to hold is little brother and smothering him with kisses, always giving a great big smile and a friendly "hello" to anyone that crosses his path. And all with this coy little smile that just melts your heart. I just have to share this pic of him this afternoon in an unprompted interaction with #4. 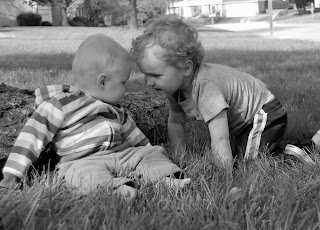 We've seen some frustrations from Drew lately. He doesn't totally cooperate when we're trying to do his treatments, isn't interested in eating all that we want him to eat, even if its in the form of donuts and milkshakes (jealous!), and just generally defiant if he's not getting his way. Perhaps its the nature of the beast; so much of his life is out of his control that when he has the opportunity to take control of something he's going all out. We try to offer him options - what he wants to watch or play during treatments, if he wants his nose cleaned out before or after his breathing stuff is done, where he wants to sit in the car (him and Lily often switch carseats). But its gotta be tough for him. I mean we all have days where we simply don't feel like doing something. Hell, here I sit at 10:00pm with a pile of nebs sitting next to me waiting to be cleaned. They're not gonna clean themselves, but I just don't feel like it right now. But he hasn't got a choice. He will get his breathing treatments and airway clearance done three times a day, everyday, until forever. We will keep him healthy. He will get the opportunity to do lots of things in his life - things his sisters and brother will do, things he will do on his own. we are focused on what is good and right, not what could go wrong.

We went back to the clinic on Tuesday for a quick culture to see if our pseudomonas eradication worked. I swear they should offer parents a Xanax for every day they have to wait for that final read to come in. I hope its gone, but we have a plan for if its not. It involves IV's again one more time before he would be considered colonized with pseudomonas. I hope he's not. We will deal with it if he is, but just thinking of his little lungs being colonized with a harmful bacteria will be a lump in the throat for a while until we figure out what we have to do on an ongoing basis if one is colonized with pseudomonas. Happy, positive thoughts for one more day. I swear attitude is half the battle!

And on that attitude note, I meet many people dealing with a different chronic illnesses, and many times our attitudes are not the same. Every once in a while now, I will mention in passing that Drew has CF. Period. I will answer any question that anyone asks me, and can talk for hours on end about all of the projects that I'm working on toward improving outcomes or the work that I do with the Foundation to spread awareness. I wish they could see how much better it feels to focus on hope. No disease is easy. Having a kid with a runny nose isn't exactly a walk in the park. Winston Churchill may have said it best -"Attitude is a little thing that makes a big difference." Amen.

We're leaving for Disney in two weeks. Planning out a 16 hour/ two day drive was not exactly exciting. The kids are really great in the car so I'm not too worried about the trip, though I don't think it will be the most fun part of our trip. I so hope that its fun though, overall. I think the kids are going to have a blast and at the same time be incredibly cranky and annoying due to both heat and exhaustion. Lucky for us, my parents will be joining us for the last 3 days of the trip as Martin and I will be attending the North American CF Conference. I'm seriously excited for this. The list of different presentations is so huge that I need to start digging through to figure out what I want to go to most. Quite unfortunately, there is a portion of the conference specifically designed for parents. That portion of the conference will take place on Saturday, and that is the day that we will be leaving. We can go to the meetings on Saturday morning, but will have to leave around noon to get back home by Monday. Hopefully being at the rest of the conference will leave me so overwhelmed with information that I won't even miss the portion specific to parents :)