If you read the blog with any frequency, you probably noticed a new button I added just under the main picture of Drew. Its a button from Pepsi to vote for the Cystic Fibrosis Foundation to win a grant to be used toward a research study for babies. This is so important; more important than you can probably imagine. Let me tell you a little bit about the study and why its important to vote.
Here's the researchers description of the study they are hoping to be able to perform if we win the grant from Pepsi.
"A growing body of evidence supports the importance of intervention in CF lung disease during infancy, in order to potentially delay or prevent irreversible lung disease. Yet, aside from antimicrobial therapies, the CF community has no clinical trial evidence base with which to guide pulmonary therapies in infants and toddlers. Hypertonic Saline (HS) is the most attractive chronic maintenance therapy to investigate in infants because it addresses defective mucociliary clearance, an early step in the cascade of events leading to CF lung disease that is expected to be abnormal prior to the onset of airway infection and inflammation."
I'm going to take things back a step and really try to explain CF to you, mostly using info I've taken off of various websites (thank you Johns Hopkins CF Center website!). Bear with me, it might take a while to get to my point. Here goes!
The cystic fibrosis transmembrane conductance regulator (CFTR) gene codes for a protein also known as CFTR. The CFTR protein resides in the surface of cells which line the lungs, digestive system and sweat glands. The symptoms of CF are caused by the inability of the CFTR to release chloride leading to the production of thick, sticky mucus in specific organs. 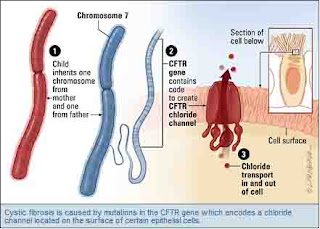 In normal cells, the CFTR protein acts as a channel that transports chloride into and out of cells, and regulates the passage of salts.
The CFTR protein is composed of 1,480 amino acids—the building blocks of all proteins—and is inserted into the cell surface or membrane. The protein is made up of a single chain of amino acids that are grouped in five functional regions called domains. Since each domain has a special function when it comes to transporting chloride through the cell membrane, mutations in different domains will cause a range of mild to severe CF symptoms. Mutations in CFTR often affect the three-dimensional structure of the protein and prevent CFTR from reaching the membrane.

The location of the CFTR protein, which is found in several organs, determines where the symptoms of CF occur. The organs that are typically involved in CF are the skin, pancreas and lungs.

The Sweat Gland
Sweat is produced in glands under the skin, transported to the skin surface through ducts, where some of the salt and water are reabsorbed. In normal skin functioning, as sweat moves along the duct most of the sodium and chloride -- the components of salt -- are reabsorbed.

The salt reabsorption process is markedly abnormal in people with CF. Chloride transport is virtually eliminated because CFTR, which is the main way for chloride to enter the apical, or top, surface of cells is defective. Chloride must travel through the CFTR, located on the surface of the duct cells, at the same rate as sodium to maintain a balance of electrical charges. This results in very little sodium and chloride reabsorption, leading to a high salt content in CF sweat -- so high that the sweat chloride concentration is the most reliable single test for CF.

The Lung
The lung’s airways are covered with a thin, moist film called airway surface liquid, or ASL, a salt-containing liquid and a mucus gel layer. The ASL traps bacteria and foreign particles, while cilia on the surface of airway cells constantly move the particles out of the lungs and toward the mouth. This process, called mucociliary clearance, or MCC, is an important defense mechanism that protects the lungs from infection. ASL also contains antiproteases, antioxidants, antibodies and other substances that work together to neutralize or destroy invading organisms without damaging the lungs. In CF airways, decreased chloride transport is coupled with excess sodium transport out of the surface liquid. Since water follows the flow of sodium, the ASL loses volume and the mucus gel layer becomes dehydrated.

The Pancreas
Pancreatic gland cells secrete digestive enzymes that join a bicarbonate -rich fluid secreted by cells lining the pancreatic ducts. This combination forms an alkaline, or non-acidic, mixture which maximizes enzyme function. Enzymes are proteins that speed up chemical reactions; without them, our bodies would grind to a halt. In CF patients, pancreatic gland cell secretion may be normal, while bicarbonate fluid secretion decreases. The two transport pathways at the apical cell membrane involved in bicarbonate secretion, and the way the CFTR interacts with these exchangers, are under investigation.

Although CF was originally described as cystic fibrosis of the pancreas, pulmonary problems are the leading cause of disability and early death. The mechanism of lung injury is twofold:

• Inflammation causes continuing injury to the lung that leads to scarring and loss of function. This process is exaggerated because CF cells produce inflammatory chemicals called mediators, even in the absence of infection. 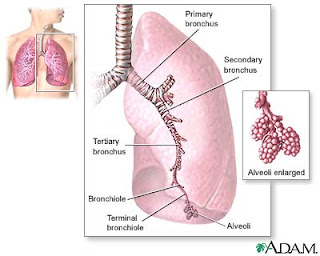 The primary site of lung injury is within small airways called bronchioles. Think of the anatomy of the human airway as an inverted tree -- the trachea is the hollow trunk and the bronchioles the smallest stems before the leaves. The outer wall of the ‘trunk’ is comprised of connective tissue and muscle that gives shape and structure, but is flexible to allow coughing. The inside layer is covered by epithelial cells containing CFTR and other ion channels, cells with cilia and cells that secrete components of the ASL. In CF, the ASL is abnormally thick and viscous because it contains thick mucus, bacteria, neutrophils - white blood cells attempting to kill the bacteria - and cell debris like DNA remnants from white blood cells. The blockages in the smaller airways caused by thickened secretions can be made worse by swelling of the lining of the airways from constant inflammation.

The thick, dehydrated mucus that obstructs bronchioles sets off a vicious cycle of infection and inflammation. Interestingly, the immune response to lung infection in individuals with CF is not impaired and in fact may be too aggressive, leading to lung damage. In healthy lungs, introduction of bacteria results in a rapid influx of neutrophils, or white blood cells, and eradication of the bacteria. In CF patients, however, the production of certain compounds allows the bacteria to escape the normal immune response.

If you look at the images below, you can see in the first the normal looking airways of a person without CF. Imagine that their airways are like breathing through the straw you get with a triple thick milkshake from McD's- big and wide and open. When you get to the bottom picture of infected and inflamed airways like Drew has, you can imagine the airways being more like breathing through a coffee stir straw. Big difference. 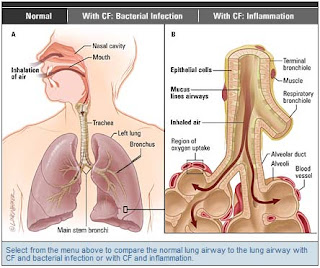 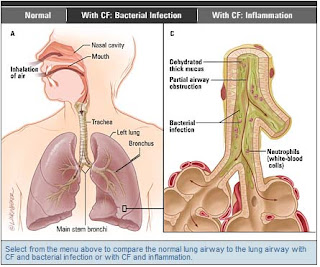 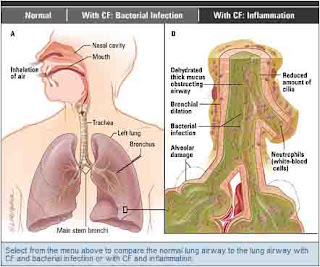 Over 90 percent of people with CF have an impaired pancreas leading to an inablilty to produce enzymes, the chemicals that digest food. Some people with CF have at least one CFTR mutation that allows some production of functional CFTR protein: Their pancreases will be able to produce enzymes. Normally, food proteins are digested by stomach acid and enter the duodenum, a specialized portion of the small intestine that allows pancreatic and gall bladder secretions to mix with the food.

• Bicarbonate creates an alkaline solution to neutralize the stomach acid.

• Pancreatic digestive enzymes aid in the beakdown and absorption of fats, sugars and proteins from the gut. These work best in an alkaline environment and may become inactive in an acidic environment.

• Bile, produced in the liver and concentrated in the gall bladder, helps with fat digestion and eliminates waste products. 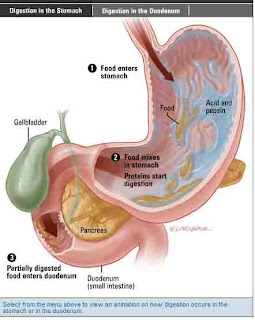 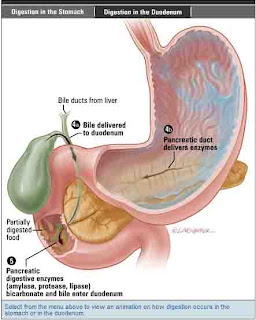 Malabsorption of essential nutrients is characterized in CF by poor weight gain, growth retardation, delayed puberty, and muscle wasting. Patients with CF need to be frequently monitored because nutritional needs change with disease progression and normal growth. To maintain a desirable body weight and prevent or correct nutritional deficiencies, CF patients might have to consume twice as many calories as recommended for healthy children and adults. Increasing the intake of calories can also aid in adequate fat, vitamin, and mineral absorption.

Nutritional therapy helps prevent complications, such as glucose intolerance, intestinal obstruction, cirrhosis, and pancreatic disease. Vitamin and mineral supplements such as the fat-soluble vitamins A, D, E, and K are often used. Since these vitamins use dietary fat is necessary for absorption of these vitamins, high-fat food consumption is often encouraged. Fat is also the most concentrated source of calories and improves the palatability of foods, and with caloric needs so high in CF patients, this becomes essential. Protein deficiencies are most likely to occur during periods of growth and infection.

Hopefully this provided a good explanation of CF. Here's why I need you to vote. The inhaled saline study that the Cystic Fibrosis Foundation is in the running to win a grant for could make a dramatic difference in the life of many infants and children living with CF. Adults with CF already use hypertonic saline (concentrated salt water). By using this therapy, some of the salt lost by CF patients in replaced and allows for the ASL to move more normally throughout the lungs, reducing the risk for infection leading to lung disease. They will not prescribe Hypertonic Saline to babies because there has not been any research done to show its benefits.
The Cystic Fibrosis Foundation is NOT FEDERALLY FUNDED and relies solely on individual and corporate donations to fund its research. I'm not asking for any money, i'm just asking for a moment of your time. We are in the running to win a $250,000 grant that will be used to fund this critical research and without the grant money the study cannot take place. Your votes can help us to win. You can vote every day. It only takes a minute. You can text 102534 to Pepsi at #73774 or you can vote online by following this link -http://www.refresheverything.com/helpbabiesbreathe . You can vote everyday now through September 30th. It will only take you a moment but it will allow the many babies with this disease the opportunity to live a longer, healthier life. Please vote!