A Graphic Description of the Ostomy - PROCEED WITH CAUTION

Because I have received so many questions about the ostomy that I complain so much about, I thought I would try to explain more about what it is, what it looks like, and how it works, equpiment and all. I'm more than happy to answer any and all questions you might have. Trust me, no question is too gross or to personal :)
WARNING: THERE ARE SOME GRAPHIC PICTURES BELOW. PROCEED AT YOUR OWN DISCRETION.
So below is a diagram of a persons digestive system. Basically, food passes through a persons stomach, all through the small intestine then all through the large intestine before passing through the colon and eventually being pooped out the anus (i'm just gonna go ahead and call it the butt). Its important that food follows this path for optimal nutrient absorption. The colon basically removes water from our waste so that we don't all have diarrhea all the time. 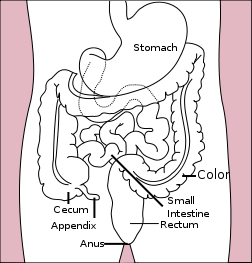 Drew's large intestine was blocked with meconium (very very thick hard poop that the body can't pass on its own) . This caused the entire large intestine to be very distended. To correct this, they cut into his belly and right above where his colon is (see diagram above) they cut a little slit and pulled out all of the meconium. Here is a picture I found online of what a bowel of a baby full of meconium looks like (WARNING - ITS GROSS!!!!!) 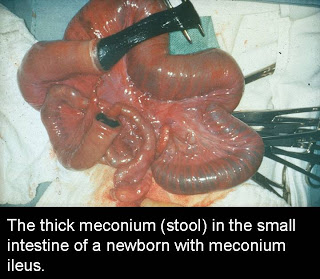 You can see just how stretched out and thin this baby's bowel is from being clogged with this poop. So anyway, they went into his belly and pulled out his intestine and cut a little slit in it to pull out all of this thick hard poop he couldn't pass. Then they sewed him back up and waited for a few days for the bowel to heal because of how stretched thin and worn out it was (distended). Then, a few days later, an x-ray showed that there was air in his belly and it apparently was because the bowel was just worn so ragged trying to deal with the meconium that it couldn't handle the air and pressure once it was all clear and trying to work properly that it blew a hole in it. Here's where the ostomy comes in.
So they rush Drew back into surgery, and snip his large intestine right into two pieces - if you go back up to the diagram at the top, its right about where the word Colon in - they just cut it right into two pieces and poked both ends right out his belly. Here is a picture of what it looks like, only he has two sticking out right next to eachother - each end of the intestine (another gross picture - this isn't his, just some random picture i found online, but his looks just like this X2): 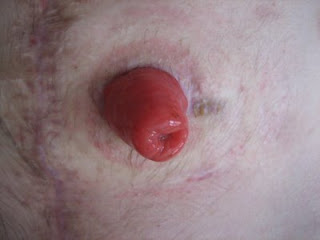 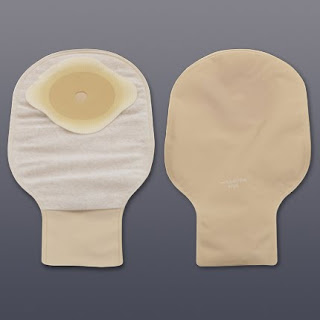 So to avoid having poop just sitting on his belly (which is both gross and dangerous), you need to attach this bag to his belly, but just have to cut a hole just the right size for the stomas to fit through so the poop doesn't get on his belly. You can kind of see the little hole that is cut in the bag on the left. We have to have two holes, one for each stoma. Even though poop only comes out the one hole, we still need to keep the other one wet, so it stays in the bag. Cutting these little holes, probably about as big as a finger is around, is a pain in the ass because you have to get them just right. Then there is skincare prep that serves two purposes - one is to protect his skin if the poop does leak and get on it (and we all know that happens!), and the other is to help the bag adhere. So we use this caulk and this other paste stuff and try to get this bag stuck as close and tight around these stomas as possible. I have to admit that its getting better. We're only changing the bag once a day, but its still a royal pain in the ass.
Why does the bag leak so much you may ask? Well, there are several reasons. First, remember that Drew's belly is about 6 inches wide. In this bag that is probably 5 inches wide, we need to cut two perfectly spaced and shaped little holes. We do good, but its hard. Second, the vehicle by which this thing sticks to his belly is quite literally a sticker. When he moves, and babies do nothing but move, it peels up. When it starts to peel up and air gets under it it causes leaks. So we've done just about everything short of stitching it to his belly, and we can now get about 18-24 hours out of a bag. It just is what it is. We've talked to skincare specialists at the NICU. We've talked to wound care experts, people who deal with this kind of thing everyday, and the basic summary is that it just is what it is. The two stomas is kind of part of the problem. A lot of times when doctors do this kind of surgery they knot off the one end of the intestine and leave it inside, so there is just one end of the intestine sticking out (the end that the poop comes out of ).
I found a picture of a baby with one of these stuck to him (see below). Drew's pretty much looks like this too. Just a bag, usually full of liquid poo (remember its not going through his colon so its very very liquid) hanging from his belly. We try to tuck it up in his diaper, but gas also comes out this hole so it fills up with air and if its secured under his diaper it often causes it to leak or burst when it gets to full of air if its all folded up. We also have to use a giant syringe to suction out and measure the poop several times a day. If the bag gets to full it leaks (surprise, surprise). Plus the folks at the sixty five roses clinic need to know how much is coming out to determine whether or not the enzymes are providing the appropriate amount of fat absorption. Once the ostomy is gone we will just have to pay attention to wet and dirty diapers. 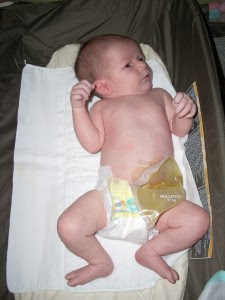 Hopefully this answers a lot of questions you might have, and hopefully I haven't grossed you out to much. This is why we can't really take him anywhere until the bag is gone. I know that there are people that live their entire lives with ostomy bags, and I feel for them. But for us and the success that we've had (or haven't) its just way to big a pain in the ass to clean poop off of a 9 week old baby in the back of a car and spend half an our getting the thing caulked back up and a new bag put on. So we'll just keep him home for a few more weeks. The appointment with the surgeon is on Monday and we're hoping we find out when we can have this thing fixed. They said its a simple surgery - open him up, sew the two ends back together, close him up, call it a day. I hope it goes that way :)